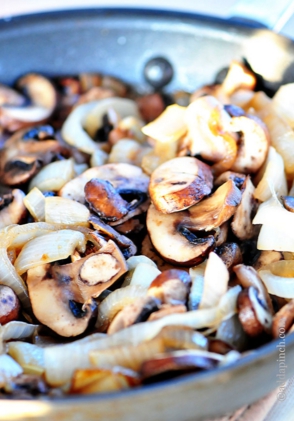 How Special Is This Mushroom?

So, there’s mounting evidence that mushrooms are pretty good for you. And I  eat them since I’ve seen no evidence to the contrary and they’re delicious.

Especially from the farmer’s market, because the grower is a laid-back guy that loves his trade and does it well. You can’t buy mushrooms from him without getting into a discussion about them and the ones I bought from him left me enlightened at the difference between his and the ones I could buy at the grocery store.

Shiitake are always pretty good, and I bought some at whole foods because I was craving them. In case you want to do more than just cook them, but are interested in starting to grow your own read this interesting article.

My first thought, of course, was that it would be excellent with garlic, so I did a Google search for “garlic and shiitake” and found a recipe, see steps below. But I have the habit of not following recipes, and I didn’t have shallots, so I kind of changed it into this recipe:

Decide that if needs a little more of something.  You could really use any mushrooms with this recipe or a variety of mushrooms.

Don’t get mad that the recipe is  not exact.

I had no intention of ever posting recipes I had concocted because I don’t include amounts and that can frustrate people. I don’t even know the amounts. I just looked at what I had on-hand and put in the pan whatever I felt was right at the time.  I’m surprised I remembered the ingredients, frankly.

The onions were just the right sweetness; the cooking time and temp were perfect for mellowing their flavor without putting it to sleep, and the apple cider vinegar firmly rounded it out. Then I got the first mushroom in my mouth and the umami flavor covering my tongue was heavenly, and provoked an audible sound of appreciation.

You can see of course that I needed a salad to go with it.

I went with the old standby salad of  Arugula leaves with avocados & radishes along with a vinegarette of lemon juice, olive oil, salt & pepper. Now, an avocado is like a big soft happy dude that hugs you.   Eat an avocado by itself and you’ll see what I mean. It can be a little much; that’s why I like to have a couple of his buddies, lemon juice, and arugula, to balance him out. I shredded some Parmigiano Reggiano on top because the cheese on salad gives it a bit of a salty bite. But I also added radishes, because I had a bunch from my farm share.

When I had tasted them earlier, they seemed to lend themselves to salad, crisp and refreshing as they were. But their crispness was too forthright and their unique flavor–a flavor that brings to mind the image of pink flowers in a steel box–was a bit too sharp a contrast to the avocado. The radish, instead of putting a restraining hand on avocado’s shoulder, slapped him.

However,  it was a pretty good salad despite my improv efforts.