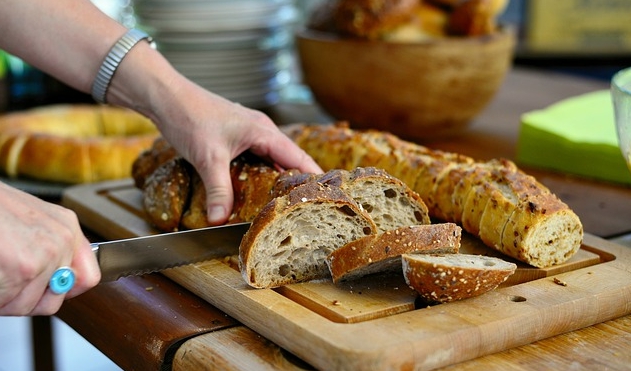 Winter temperatures can be freezing in some instances, and the chilly weather can cause discomfort among different individuals. Many people resort to wearing warm clothing and turning up the heater in their homes. However, there are also other delicious remedies that can help to reduce the effects of cold weather on your body. 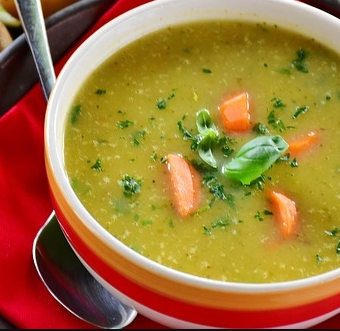 The pea soup is thick, and that is how it is supposed to be. The Dutch are of the view that erwtensoep (also called snert) should be thick such that a spoon can stand upright in it. In the Netherlands, the soup made of split peas is traditionally served on New Year’s Day. However, people also enjoy it throughout the winter and fall months.

You can add more stock if you want thinner soup and it is customary to serve it together with slices of smoked sausage (rookworst). The soup also goes along with rye bread and is topped with katenspek, Dutch bacon that you first cook then smoke.  In America, you would use cooked or fried breakfast bacon on top of your sliced bread.

Using a large soup pot, bring water together with pork chop, bacon or pork belly, bouillon cube and split peas to a boil. Reduce the heat for the contents to cook and simmer for about 45 minutes while stirring occasionally. Take off any foam that rises to the top.

Remove the bones from the pork chop and slice the meat thinly and put aside. Add celeriac, leek, onion, potato, celery, and carrots to the soup, then return to boil.  You should reduce the heat to let the contents simmer without a cover for about 30 minutes.

As far as the vegetable, you can cut them chunky or dice/ chop them finely; that is a personal preference.  If you want a more creamy soup, you could even use an emersion blender, but that is not traditional in Holland.

If the ingredients start sticking to the bottom of the pot, add a little extra water. You should then add smoked sausage during the last 15 minutes of total cooking time. Remove the smoked sausage and bacon when the vegetables are tender. Slice them thinly and set aside.

Serve in soup plates and garnish with “rookworst” (Dutch word for smoked sausage) slices together with chopped celery leaves. You can also season to taste with pepper and salt.

Traditionally, you serve this as a main course meal with rye bread or pumpernickel bread, but French bread is also tasty. 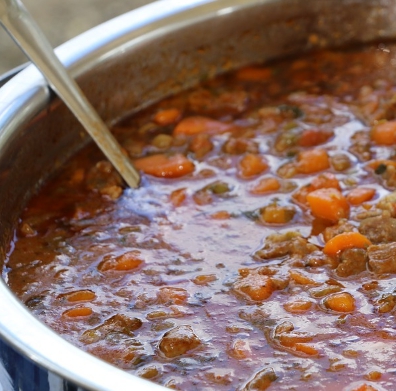 The recipe is meatless, and it is very delicious. You can substitute the vegetables with any of your preferences. When the soup is ready, you can serve it warm with bread on the side. Apart from tasting good, the soup also makes your body feel warm. The lentil soup is suitable for the winter season when temperatures can be shallow at times.

The recipe is easy to prepare as long as you have the right ingredients and also follow the directions. When you want to make the recipe, you must first procure the following parts so that you can enjoy quality soup.

Directions For Preparing The Soup

The preparation time of the recipe is about 15 minutes, and you should make sure that all the ingredients are in the right quantities. When cooking this soup, you should use a slow cooker or also called a CrockPot. You need to mix the first thirteen ingredients except for diced tomatoes and cook them together for about six to eight hours. You must cover the components when cooking and maintain low heat until the vegetables and the lentils are tender.

When the primary ingredients are tender, you then discard the bay leaves and stir the contents of the can with diced tomatoes. Cover the materials again and cook for another 30 minutes longer using the same low heat. When the soup is ready, you should serve it warm with some pieces of bread or rolls, and it is enough for eight people. The soup is a very hearty soup and will fill you up like a meal.

Variations: add a protein in the last 30 minutes, like pre-cooked chicken pieces, cut-up sausage, or beef tips.  If beef or chicken is not pre-cooked, then add it in the beginning.

Apart from keeping you warm, spicy veggies and lentil soups are good for your health. It consists of 146 calories which give the body some energy as well as 693 mg sodium. The sodium component is useful for maintaining a delicate balance of body fluids.

The soup also contains low-fat content of one gram and zero cholesterol. When these components are high, they can impact on your health. On the other hand, you get 27 g carbohydrates including 7g sugars and 5 g fiber, together with 10g protein.

The soup is excellent if you want something warm in an instant. If you fail to obtain noodles, then you can use angel hair pasta as a substitute. The total preparation time for the soup is only 30 minutes, and it is shorter compared to other types of soups. You should use all the ingredients and carefully follow the directions for cooking.

Follow the package directions when cooking noodles then drain and rinse using cold water. During the same period, you should heat one tablespoon oil using a stockpot for cooking sauté pork until it turns brown. You should use medium to high heat and cook the pork strips for about two to three minutes, then remove them from the pot.

Using the same pot, you should then use medium to high heat to heat the remaining oil together with saute and garlic until fragrant. Heat these components for about 20 to 30 seconds and stir in the broth the remaining soy source. Bring to a boil and add snow peas, and celery, then return to a boil.

You should then simmer the contents without a cover on top for about two to three minutes until they are crisp-tender. After that, you should then stir the pork and coleslaw mix then cook until the cabbage begins to wilt. You then add the noodles and remove them from the heat. Top the cooked contents with green onions, and if you wish, you can also add cilantro.

The recipe makes six servings (2 quarts), and the other advantage is that it is easy to make. It gives you warmth when the temperature is cold outside. This is a much lighter soup compared to the previous one.  If you are trying to watch your weight after the holidays, this may be a great option.

The soup consists of 227 calories and 7g fat, including 1g of saturated fat. The other components include 35mg cholesterol, 16g protein as well as 23g carbohydrate. The carbohydrate contains two sugars and one gram of fiber together with 16g of protein.

A slightly different version of Asian noodle soup but also a great soup to try.

If you follow exactly the instructions, you will make a delicious soup that can also keep you and your family warm during winter. The soup takes about 10 minutes for preparation, and then 25 minutes for cooking, meaning that you need a total of about 35 minutes to serve the soup.

The recipe consists of the following ingredients, and you should make sure that you have all of them. It is also essential to carefully follow the directions for preparing the soup.

Directions For Cooking The Recipe

Using a Dutch oven, you should cook and crumble bratwurst with carrot and onion over medium heat. Cook for about five to seven minutes until meat is no longer pink, then drain. You should aim to maintain medium heat so that the contents cook slowly. Medium heat also helps the ingredients to retain their flavor.

Stir the contents in pepper, beans, jalapeno, broth, and pepper, and bring them to a boil. Mix ½ cup cold milk and flour until the materials are smooth and stir into soup. Bring the contents to a boil and continuously stir for about five minutes until the soup thickens. Stir in the remaining milk and add cheese. Use low heat for cooking and stir until the cheese melts.

The recipe can make eight servings or two quarts, and the whole family would love it. Apart from giving you warmth, the soup is also good for your health.

The body needs relatively large amounts of sodium so that it can maintain a proper balance of fluids. With 1322mg of sodium in the bratwurst soup, the content is good for the body so that it can function properly. On the other hand, the soup contains 53 mg cholesterol which also helps the body to build tissues as well as sex hormones.

The soup also consists of 468 calories and 33 g carbohydrates (five grams sugars and six grams fiber). These components give the body energy so that it can maintain warm temperatures. The other issue is that the soup contains 25 grams of proteins which are also suitable for health. 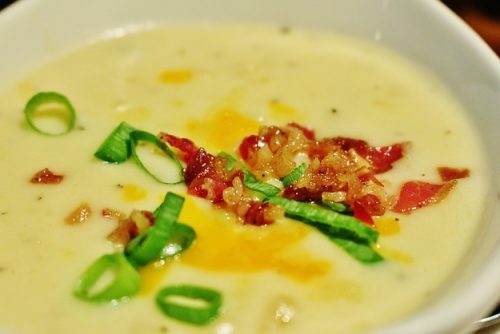 This is probably an all-time favorite winter soup. Baked potato soup is thick and creamy, and you can use leftover baked potatoes. The total cooking time of the recipe is 40 minutes, and it can serve six people. Preparation takes 15 minutes, while cooking requires 25 minutes, and you need to follow the instructions correctly. You should also make sure that you have all the ingredients.

Cooking the soup involves three necessary steps. If you carefully follow these steps, then you can manage to make a delicious soup.

You first place your bacon in a large, deep skillet and cook it using medium heat until it turns brown.  Remove bacon and add the chopped onion pieces and quickly sauteed in the bacon fat. After that, you drain fat, crumble the bacon then set aside with the onions.

The second step involves melting margarine over medium heat using either a stock pot or Dutch oven.  You then whisk flour and melted margarine until smooth this is your roux. Then gradually stir the contents in milk to make what is called a bechamel sauce. Keep adding the milk and stir constantly to avoid lumps.

If you notice lumps take the pot off the heat or reduce heat.  This process is then followed by stirring the mixture in cubed potatoes and chopped onions. You should bring the contents to a boil while at the same time stirring frequently.

The last stage involves lowering heat and simmering the contents for about ten minutes. After that, you mix in sour cream, salt, pepper, cheese, and bacon. You then continue cooking while frequently stirring until the cheese melts.

For a nice presentation sprinkle some sliced green onions, bacon crumbles on top when you serve the hot soup. If you have leftover shredded cheese why not add some more on top of the soup when serving.  You will enjoy it, and it can also keep you warm when it is cold.

The soup is also nutritious, and it consists of 748 calories which help the body to gain energy. It also has 49.7 carbohydrates which are also energy giving. The soup also contains 49.3 grams of fat, 27.1 g of protein.

The other essential components in the soup include 85 mg cholesterol as well as 1335 mg sodium. The levels of both cholesterol and sodium are good for health since they are neither too high nor too low.